What is Laser Spine Surgery?

Laser spinal surgery, or percutaneous laser disc decompression, utilizes an advanced laser machine which uses the heat from the laser to evaporate soft tissues in your spine to decompress areas causing you pain. In many laser spine surgery procedures no incision is necessary, which means there are less risks for complications, and a faster recovery time. PLDD decompresses the bulging disk pressing on your spinal nerves, which is the cause of ongoing chronic back pain, but also prevents the disk from bulging again in the future.

How Does Laser Spine Surgery Work?

The first step is deciding whether or not a patient is a good candidate for laser surgery. Typically, your doctor will talk to you about your symptoms, and what treatments you’ve tried to deal with neck pain or back pain first, then decide the treatment plan from there. If you have persistent back pain that hasn’t been dealt with adequately with pain management, you might be a candidate for laser spine surgery.

Laser spinal surgery is a minimally invasive spinal surgery due to the nature of the laser device used. The laser can be fed through a thin needle, which is inserted through the back and directly into the spinal disc to start decompression. It’s a quick and relatively painless procedure that leaves no scarring because it doesn’t require incisions. Other surgeries, such as spinal fusion, require large amounts of cutting, and removal of bone, plus hardware installation into your spine. This is why laser surgery is a good approach for those looking at minimally invasive options. Endoscopic spinal surgery is also another minimally invasive surgery, though it uses an endoscope which is a larger tube than what’s used in a laser spine operation, which only uses a very thin needle. 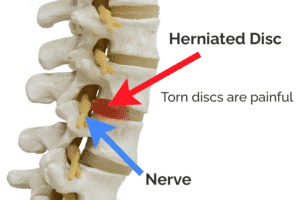 Laser spine surgery treats herniated discs up to 70% effectiveness in patients. The laser evaporates the herniated discs’ nucleus, causing the bulging disc portion to recede and relieve compression on your nerves. This should have an immediate relief on your pain, and because of the heat of the laser it can prevent the pain from coming back. Herniated discs are one of the most prominent causes for spinal pain and back pain, and laser is a leading solution.

Laser Treatment for Back Pain

Bulging discs and herniated discs are a relatively common condition affecting many people today. Laser spine surgery is meant to treat back pain and neck pain in those people living with pain caused by a bulging disc or herniated disc. It’s uniquely suited to solve back pain because it specifically targets the herniated disc with the precision of a needle. The laser treatment for back pain was developed in 1986 by Dr. Daniel Choy and has since been performed over one hundred thousand times. Another name for the laser treatment is Percutaneous Laser Disc Decompression or PLDD.

How Safe is Laser Spine Surgery?

Laser spine surgery has very low risk of complications, and a large majority of patients experience little to no discomfort at all. Some pain at the needle injection site is the most common side effect. There are many laser spine surgery testimonials from real patients who have had their pain resolved with laser surgery with no complications and quick recovery times. In comparison to other spinal surgeries laser spine surgery has less risks, and an equal to greater success rate in relieving back pain. Advances in laser technology have allowed this modern surgery to help with herniated discs, as opposed to the old school spinal fusions, which require cutting open of the back and using hardware and screws to fuse spinal columns together.

Laser surgery for the spine is a MISS (minimally invasive spine surgical), while spinal fusion is traditionally an open surgery. Open means the surgeon incision goes through the skin to the muscle, and the incisions are longer than minimally invasive surgeries. The goal of open surgery is to have an open pathway to work on the problem area of the spine. As you can imagine, this was the first type of surgery to be developed, and has some advantages to having access to the problematic area, but it has more risks of damaging surrounding tissue and inciting complications. The recovery time is also longer since there will be more tissue damage during surgery. MISS, like laser surgery, will either use a much smaller incision, or none at all. The advantage of this is the faster recovery time, and less risk of complications.

What other low back pain surgeries are there? We’ve already mentioned lumbar spinal fusion surgery, but there are others as well such as spinal laminectomy, radiofrequency ablation, and artificial disc replacement. Laminectomy removes a portion of the spine called the lamina which makes room for spinal nerves that may have been pinched or pressured causing pain. Usually this is paired with a discectomy to remove a portion of spinal disc as well.

Radiofrequency ablation burns the nerve endings using radiowaves, which has similarities to laser due to the minimally invasive nature of the procedure, but the pain relief only lasts for up to a year. After a year the pain can return, and the procedure will have to be repeated.

Artificial disc replacement just replaces your entire spinal disc with an artificial one, which requires long careful surgery and a lengthy recovery time, as you can imagine.

Where are laser back surgery Atlanta centers?

AllSpine Laser and Surgery Center is an innovator in this procedure, and is one of few facilities offering the advanced laser surgery treatment for herniated discs. We have experienced neurosurgeons who have performed hundreds of laser surgeries, and thousands of operations on the spine over their long careers. AllSpine also has open MRI machines which give you more accurate diagnosis of your spinal problems. We have three locations around the Atlanta metro area, and will evaluate if you’re a candidate for laser spine surgery. Call to schedule an appointment today, or check out our locations in Decatur, Stockbridge or Newnan.